Why is Temple Grandin different then the rest of the crowd? 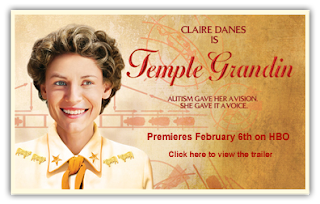 Why is Temple Grandin different then the rest of the crowd?

Temple Grandin, Ph.D., is different from the rest of the crowd because she the most well-known and probably the most vocal adult with autism in the world. Like most parents with children with Autism her parents were told she should be institutionalized. Thankfully her parents like many parents I know did not listen to that and she is now a renowned author and works as a Professor of Animal Science at Colorado State University. Templin also is a well known speaker on both autism and cattle handling.

From Emergence: Labeled Autistic, Temple has said, "I have read enough to know that there are still many parents, and yes, professionals too, who believe that 'once autistic, always autistic.' This dictum has meant sad and sorry lives for many children diagnosed, as I was in early life, as autistic. To these people, it is incomprehensible that the characteristics of autism can be modified and controlled. However, I feel strongly that I am living proof that they can".

Despite the above quote the Autism News still titles their Feb. 2, 2010 article “Temple Grandin warns against ‘curing’ autism”. I personally do not read this quote as saying that, “I believe there’s a point where mild autistic traits are just normal human variation. Mild autism can give you a genius like Einstein. If you have severe autism, you could remain nonverbal. You don’t want people to be on the severe end of the spectrum. But if you got rid of all the autism genetics, you wouldn’t have science or art. All you would have is a bunch of social ‘yak yaks.’” (http://www.theautismnews.com/2010/02/02/temple-grandin-warns-against-curing-autism/

While a lot of high functioning people with Autism and Aspergers do object to “recovery” or “curing” a child with Autism, I believe Temple has PITA’ed up and said while she would not change herself she is not opposed to helping our kids who are not HFA“. For a parent of child who most consider low functioning, I think this is wonderful that she can see the difference. I wish others could too. I would never ever take away my child’s “normal human variation”, but I also do not want to leave him in the autism alone. Before diet and enzymes he colored and spinned 22 hours a day and thought of me as nothing more then the furniture. 6 years later he has a smile that lights up a room, and when he looks at you and smiles because he knows you it could melt even Frosty the snowman.

I hope someday he can be as accomplished as Temple, and tell his thoughts and opinions on the subject of Autism. Not only do I think Temple is pretty special so does TIME magazine, you can now vote in “The 2010 TIME 100 Poll for the leaders, artists, innovators and icons who you think merit spots on this year's list of the 100 most influential people in the world”

I hope everyone who thinks like me takes the time to vote, let’s show the world that some one with Autism can be the most influential person of the world.

As always PITAup and vote for Temple!!!

If you like my blogs please become a follower and leave a comment.
Posted by PITAUP at 8:35 AM