"The parents are not going away." 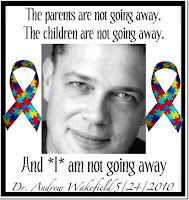 I once read “adversity doesn't build character, it just brings it out.” Thank you Dr. Wakefield once again for showing us character. I wish there were more people like you in the world.

The easy route is always the one of silence. It’s much harder to stand up and question what the norm thinks. Dr. Wakefield is one brave man for doing it.

For those of you not familiar with The Today Show or Nancy Snyderman (who used to work for Johnson & Johnson a major maker of vaccines, can you say conflict of interest?) neither is very fond of those of us worry about the Vaccine/Autism connection people. So Matt Lauer’s response to this story is really not that surprising either.

I guess what surprises me is how few true people of character exist in the media now days. Where are the reporters that helped these famous whistleblowers? From http://www.spiritus-temporis.com/whistleblower/famous-whistleblowers.html ...

Daniel Ellsberg - a former State Department analyst who leaked the Pentagon Papers in 1971, a secret account of the Vietnam War and its pretexts to The New York Times, which revealed indemic practices of deception by previous administrations, and contributed to the erosion of public support for the war.
W. Mark Felt, (aka Deep Throat) - Until very recently, a secret informant who in 1972 leaked information about United States President Richard Nixon's involvement in Watergate. The scandal would eventually lead to the resignation of the president, and prison terms for White House Chief of Staff H. R. Haldeman and presidential adviser John Ehrlichman.
Cynthia Cooper of Worldcom and Sherron Watkins of Enron, who exposed corporate financial scandals, and Coleen Rowley of the FBI, who later outlined the agency's slow action prior to the September 11, 2001 attacks. The three were selected as Time's People of the Year in 2002.
Katharine Gun - a former employee of Government Communications Headquarters (GCHQ), a British intelligence agency who in 2003 leaked top-secret information to the press concerning illegal activities by the United States and the United Kingdom in their push for the 2003 invasion of Iraq.
Joseph Darby - a member of the United States military police who in 2004 first alerted the U.S. military command of prisoner abuse in the Abu Ghraib prison, in Abu Ghraib, Iraq.
Christoph Meili - a night guard at a Swiss bank. He discovered that his employer was destroying records of savings by Holocaust victims, which the bank was required to return to heirs of the victims. After the Swiss authorities sought to arrest Meili, he was given political asylum in the United States.
Walter DeNino - a student who questioned Eric Poehlman's integrity
Paul van Buitenen - who accused European Commission members of corruption.
Jeffrey Wigand - former executive of Brown & Williamson who exposed his company's practice of intentionally manipulating the effect of nicotine in cigarettes on the CBS news program 60 Minutes.

Come on one of you all has to still be out there reporting and investigating? Why can’t you work for the Today Show? Isn’t there some new reporter who wants to be on that kind of list?
Maybe I am asking the wrong question, why isn’t there a news show that supports that kind of thinking outside the box reporting? Well I know the correct answer, its money!!! Big pharm companies bring big $ to news networks. Shame on you all for picking the money over your supposed love for journalism.
Don’t worry you pharma whore news shows, Dr. Wakefield is right, "The parents are not going away. The children are not going away”. The more in denial you are about this, the more money you take for them, it does not matter. The numbers of Autism is huge and growing day by day. You can deny us but we are here and we are not going any where. Just like 50 years ago when it was proven that smoking causes cancer, this too shall be proven!!! It may take years, but we will have our victory. I just hope you are alive to see it and that you all apologize for the damage you are doing to us now!!!
Until next time. PITAup! Its better then being a big fat coward like Matt Lauer and the Today Show!!!
Posted by PITAUP at 7:47 PM