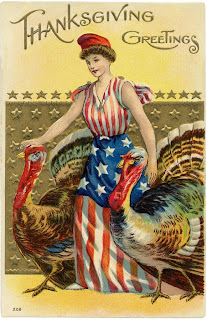 I started out the day trying to figure out how I was going to use the rest of that Thanksgiving turkey my husband said that "we" (meaning me) did not need to make for Thanksgiving.  Yes, I know he is odd, no need for turkey on Thanksgiving?  How unAmerican, lol.  That being said, I had made a ham, Tuesday night, and was also cooking a Prime Rib Roast for Thanksgiving  (but I refuse to say he was correct).

So today I decided I was going to FINALLY try Lisa Ackerman of TACA's Cream of Chicken Soup recipe, well in this case Cream of Turkey.

My 13 year old, Em, when I finished the soup was less the impressed.  I thought it turned out as close as you can get to Campbell's Cream of Chicken and still be Gluten, Casein, Soy and Egg Free. That being said, the 13 year old has never had Campbell's Cream of Chicken Soup in her last 9.5 years of life, and probably not that she can EVER remember, so she had no concept of what I was trying to accomplish.

The 12 year old with autism tasted it with objecting, so I will take that as a win.

After Em's less the stellar reviews, I decided I would figure out how to use the rest of our left overs to make something she would like and eat.   My first thought was I will make potato pancakes and we can use the soup as gravy, she'll eat that.

Then turkey pot pie popped into my head, yum, then I remember crusts are hard to make without eggs (And I suck at baking).  Then I decided that maybe I would combine the idea of Sheppard's Pie with Turkey Pot Pie and instead of a crust I would use those potato pancakes into a topping or semi crust.

Here is what we ended up with, and Em did give it good reviews... 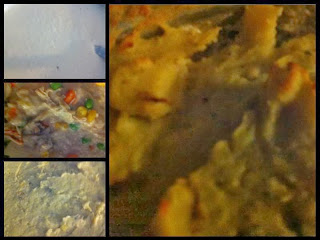 Directions:
Make the roux using a separate pan:
1)    Sauté the margarine until completely melted.
2)    Add flour and mix thoroughly to a very thick paste / roux.
Put chicken/turkey bone broth or stock in a large stock pan. Add in mimic crème, cooked roux and ½ of the cooked turkey. Wisk in corn starch.  Let cook until thick, stir frequently.  I put mine through my Ninja to make it really creamy, you could also do it in a blender.
Make Potato Pancake Topping in a separate bowl, I did it in my Kitchenaid.
Mix mashed potatoes, pear mixture or egg, GF flour, salt, pepper, garlic, and any optional ingredients, into a separate bowl and mix, I did it in my Kitchenaid
Put the Turkey Farmers Potato Cake Pot Pie Together
Put approximately ½ to all of the soup, mixed veggies (eye ball the soup and veggies for how big your pan is), and 2nd half of left over turkey in a casserole dish (approximately ½ to 2/3 of the pan high).  Mix well.
Put Potato Cake mix on top.
Bake for 45 minutes or until bubbly and the potatoes are starting to brown.  If it is bubbly and the potatoes are starting to brown you can turn to broil or 500 degrees and cook for 5 minutes longer.