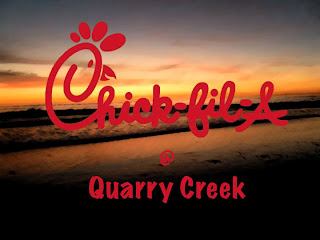 Today our visit to Chick-fil-a Quarry Creek did not go as planned. In the world of autism, or as my husband calls it, "Through the Looking Glass", that is not really unusual. What was unusual was how pleasant, in the midst of Austin, my 11 year old with autism, not wanting to leave Chick-fil-a, including a 15 minute lay on the floor in the middle of the walk way during the lunch hour!!!

The amazing staff at Chick-fil-a Quarry Creek and the General Manager, Giovanni, did not react.  They pretty much moved around Austin and never acted like there was even remotely an issue. Only one patron commented or in this case laughed (thinking I was a bad mom and that Austin had me whipped).  I calmly (for once) said loud enough for the patron to hear me that autism was not a laughing matter and that with 1 in 88 kids having autism he should get used to what he was seeing. He quickly moved away from me.

Giovanni,on the other hand, came over to ask if I needed help MORE THAN ONCE in the hour and 20 minutes we were sitting in the booth. He generously offered to give Austin a balloon or ice cream if I thought it would help.  I declined because I did not think it would encourage Austin one way or the other and because Austin has a milk allergy. Later Giovanni brought over a toy cow to help.

After about an hour I decided to text a friend who has a child with autism and see if she could come help me escort Austin out and give us a ride home. When I told Giovanni my friend was coming to help me get Austin out, and that it may be a fight, he did not bat an eye, he calmly said that it would be "no problem".  I explained that he may have to explain to the other guests that Austin had autism and that we were not hurting him, just trying to get him to leave. I explained that sometime people not familiar with autism often misinterpret situations like this. Again Giovanni said he understood and that he would take care of it, if we needed it.

Fortunately Austin left easier than expected once my friend and I got him up on his feet.  In a world where the families of children with autism are used to being stared at, it was a pleasant surprise to be offered help and understanding instead. Thank you Chick-fil-a Quarry Creek and your wonderful patrons!! Outstanding work today, it was very much appreciated!!!

Until next time, thank you to all my friends with autism in their lives, because you remind me daily my family is NOT alone and a huge thank you to Rachel for saving me and Austin.  Thanks Rachel for driving around with Austin while I got my shopping done and then driving us home.  You are amazing!!!
Posted by PITAUP at 3:27 PM